Session 4: Ports Perspectives
Moderator: Patrick Verhoeven, MD, Policy and Strategy, International Association of Ports and Harbors (IAPH)
Speakers:
Masamichi Morooka, President & CEO, Yokohama-Kawasaki International Port Corporation (YKIP)
Duncan Wilson, Vice President, Environment, Community and Government Affairs, Port of Vancouver
Peter Alkema, Policy Advisor, Port of Amsterdam, Chair of the International Association of Ports and Harbors (IAPH) CMF Working Group
Sam Ruda, Director of the Port Authority of NY & NJ
Session 4 focused on policy making in pursuing sustainability from the perspective of ports. Patrick Verhoeven pointed, “We must invest to promote environmental policies (to achieve sustainable goals),” Sam Ruda claimed, “The arguments are who to make the investments and how much need to be invested?” Patrick Verhoeven further explained, “For example, the trucking industries do not wish to invest more on trucks. They can’t do it without cooperation with other industries. However, seeking for outside cooperation in many cases comes with a counter proposal of cooperation, so it is not easy.”, and hence he claimed for incentives to encourage environmental actions. A voice from the audience argued “what about the penalty on those violations against environment and causes pollution?” while some other responded that the carrot and stick approach such as combination of incentives and regulations might be effective. In addition, the necessity to terminate incentives when all vessels become environmentally friendly was discussed.
Another question regarding the cooperation among the ports was this, “There are many similar environmental protection programs around the world, do we need a single integrated platform instead?” several participants responded positively. In addition, Masamichi Morooka pointed out the following, “Ports and harbors are local entities, we do not have an intergovernmental authority like the International Maritime Organization (IMO). We can utilize some port and harbor networking groups such as the IAPH to enhance communications and cultivate action plans. Events such as Yokohama Maritime Forum (YMF) should be organized effectively in terms of encouraging dialogues among stakeholders such as ship owners/operators, port authorities, terminal operators, etcetera.”
In terms of ensuring LNG bunkering availability and safety, Peter Alkema explained, “Diversify of vessel type is increasing, LNG is becoming a principal marine fuel intermediately and even over a long term.” he also mentioned, “because LNG fuel and other new energies will require high level safety management, a framework that guarantees safety must be established,” he then introduced the Audit Tool which was developed by his working group under IAPH, and share with the audience the ambition of his working group on safety measurement for other future alternative marine fuels based on the previous experience on LNG.”
Masamichi Morooka emphasized that it is essential to build up a network of LNG bunkering available ports instead of flying solo when considering long haul voyages. Duncan Wilson disclosed their endeavors on achieving ship-to-ship LNG bunkering at Port of Vancouver by early 2022, and stated, “Cooperation is the key”. 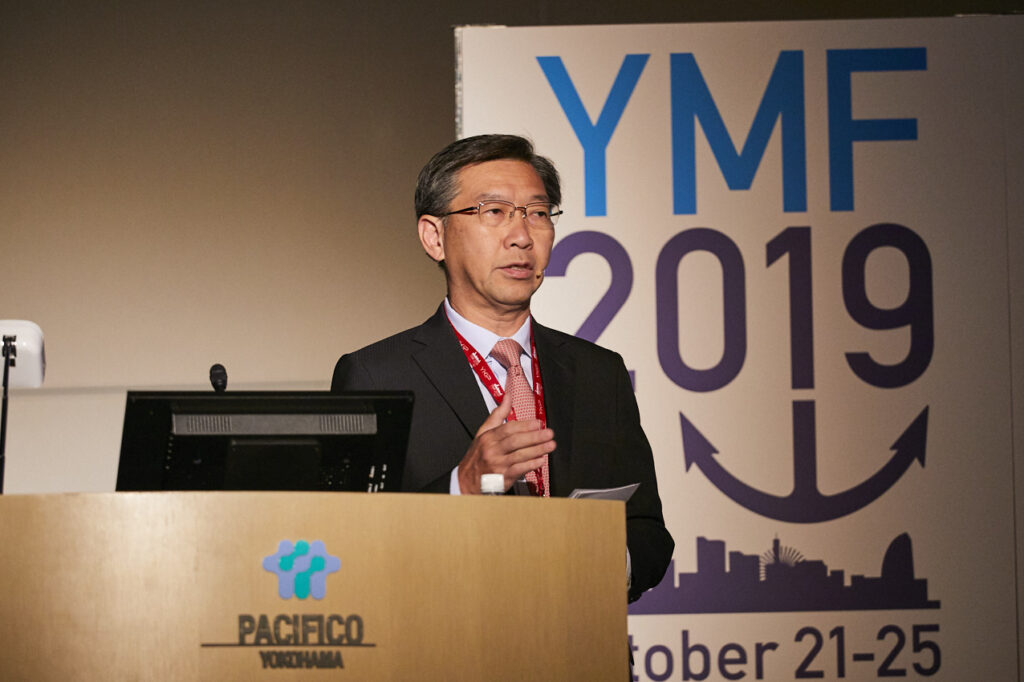 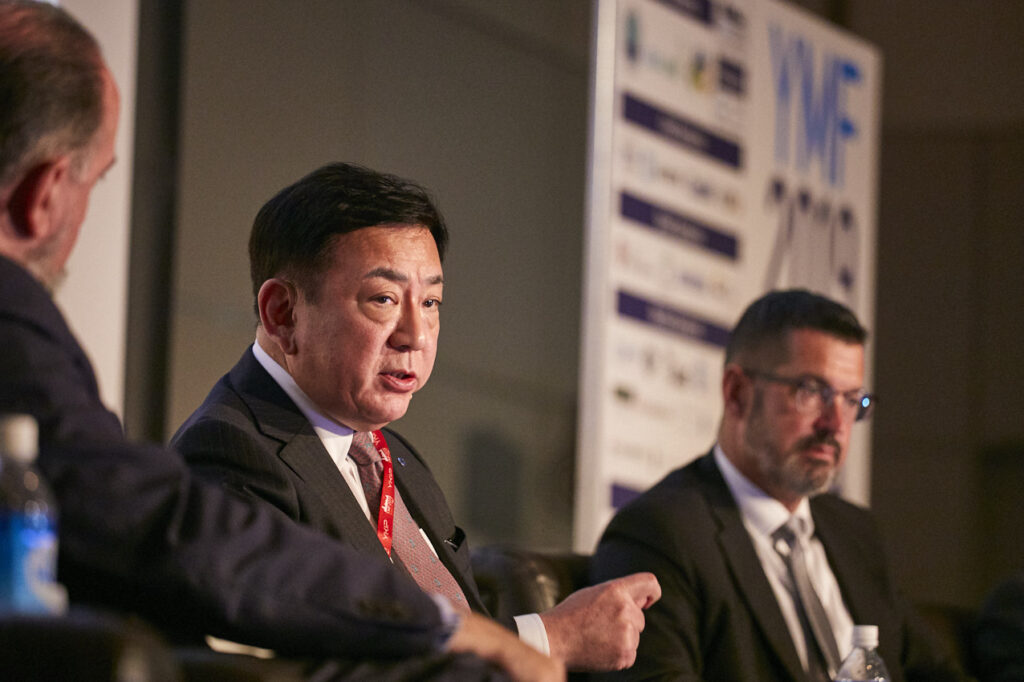 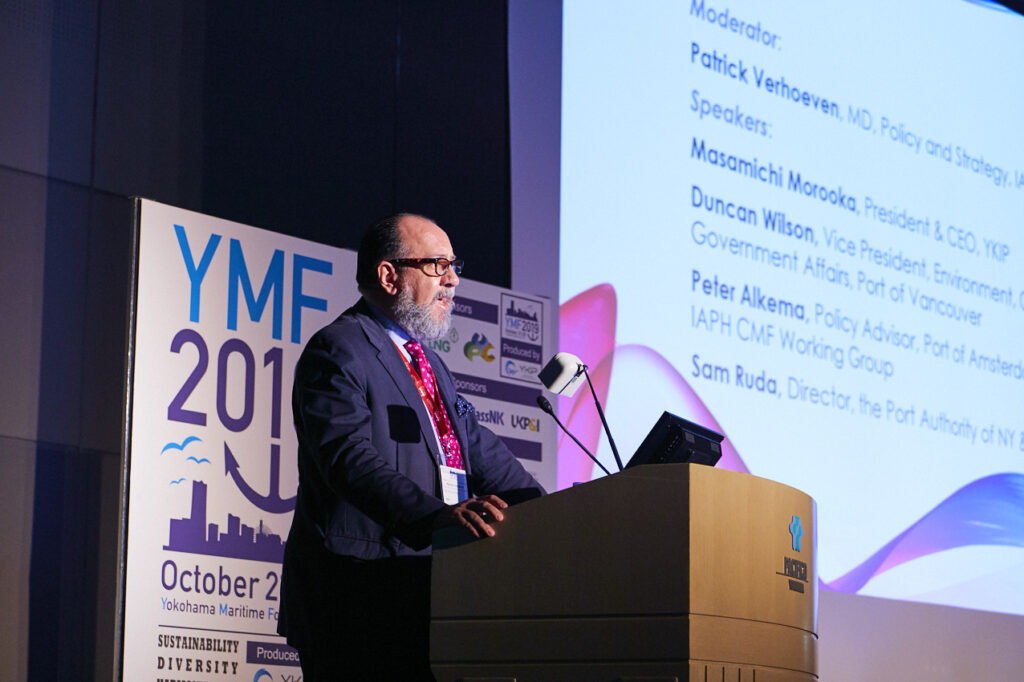 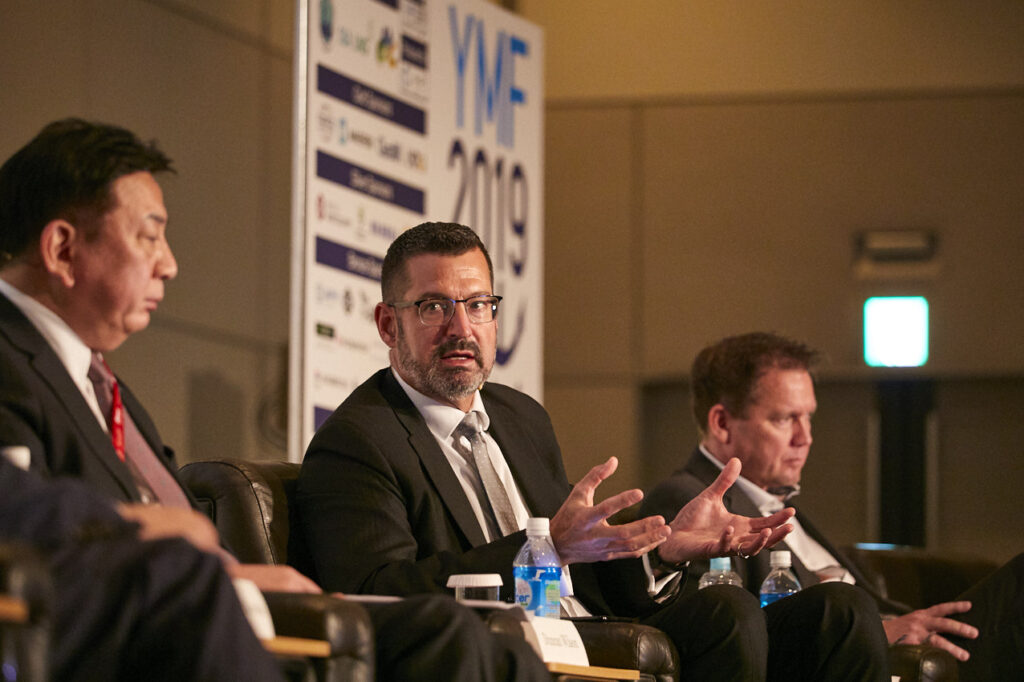 Session 5: Clean Ocean and Governance
Moderator: Paul Holthus, Founding President and CEO, World Ocean Council (WOC)
Speakers:
Katharina Stanzel, Managing Director, International Association of Independent Tanker Owners (INTERTANKO)
Mariko Kawano, Professor, Waseda University, Faculty of Law
Tomoyuki Koyama, Managing Corporate Officer, NYK
Atsuhiko Isobe, Professor, Kyushu University
Paul Taylor, Managing Director, Global Head of LNG Shipping and Offshore, Societe Generale, London
Session 5 focused on the theme, “Clean Ocean and Governance.” Professor Kawano mentioned the United Nations Convention on the Law of the Sea (UNCLOS) that discusses the protection and preservation of the oceans, and claimed, “This convention is important when considering how to utilize and interact with the sea.” Since the 1970s, the necessity for UNCLOS has been increasingly considered globally. Professor Kawano also suggested, “This convention is characterized by respect for existing rules and laws, and under the convention, all countries should promote efforts to protect the marine environment in conformity with its own laws.”
She further explained that it is necessary to consider the protection of fisheries related resources separately from the protection of the general marine environment (as stipulated by the convention).
She also said that protection of the marine environment must be restudied by all citizens both in their childhood and as adults. In response, Paul Holthus stated, “The role of the private sector is also important”.
Tomoyuki Koyama recalled how, on his first voyage as captain, he faced a crisis when he almost collided with another ship in a narrow water way. “I was able to avoid the collision at the last moment, but if my vessel collided with it, it could have caused severe damage which might have been an environmental catastrophe. This experience reminded me to never be overconfident and to be sure that it was understood and cooperated by the entire crew.” He also introduced past large-scale accidents in the marine transport industry that resulted as oil pollution. He reported that the maritime industry has learnt the lessons from those accidents by continually striving to strengthen safety measures and consequently reduced the number of accidents.
Specifically, he cited the case of Exxon Valdez oil spilling in 1989 which led to the switch-over to double-hull tankers. The adoption of double hulls has not only strengthened safety but has resulted in a more than 60% reduction of environmental load since the era of single-hull vessels.
Professor Isobe talked about the problem posed by microplastics floating on the sea with harmful effects on marine life. He introduced efforts by Hokkaido University and many other institutions in Japan to monitor microplastics in the North Atlantic Ocean.
He graphically showed that in the seas of East Asia including those surrounding Japan, the quantity of microplastics is higher than in oceans around the world, and sounded the alarm, “we are in a hot-spot of marine pollution.”
He also explained that research on microplastics has begun in earnest only during the past 10 years, and pointed out as a future challenge that, “We must clarify the state of the circulation of all microplastics throughout the world.”
Next, Paul Taylor introduced Poseidon Principles, which are climate change related principles concerning the financing of the maritime transport industry, and to which his bank is a signatory. Under these principles, many financial institutions including Societe Generale cooperatively evaluate efforts by marine transport companies to meet the GHG (greenhouse gas) emission reduction goals of the IMO (International Maritime Organization). Taylor stated, “Based on the principles, actions to deal with environmental problems will be confirmed in order to determine the contributions of marine transport companies.”
He also stated that according to the principles, “We partner with our customers (in the promotion of environmental measures),” and “We back investment in new fuels such as LNG (liquid natural gas), methane, and hydrogen.” 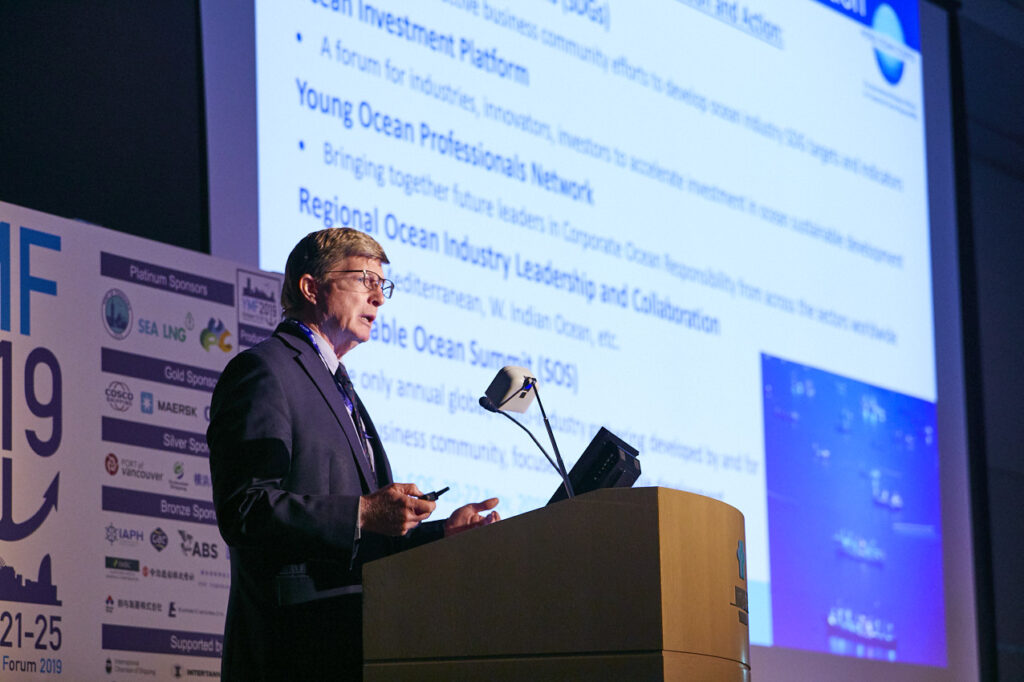 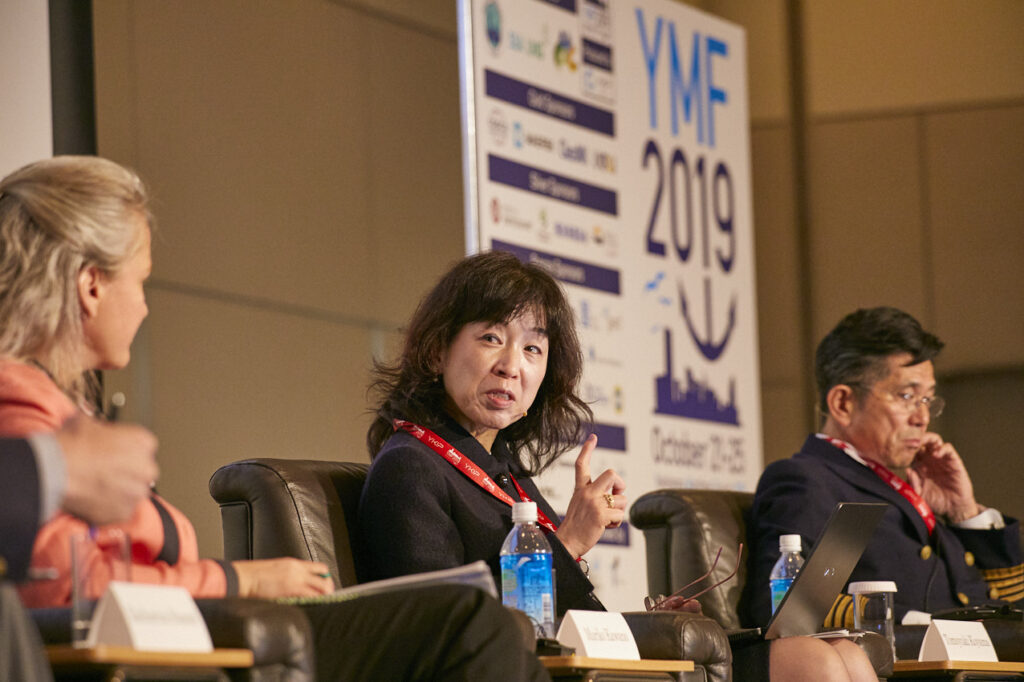 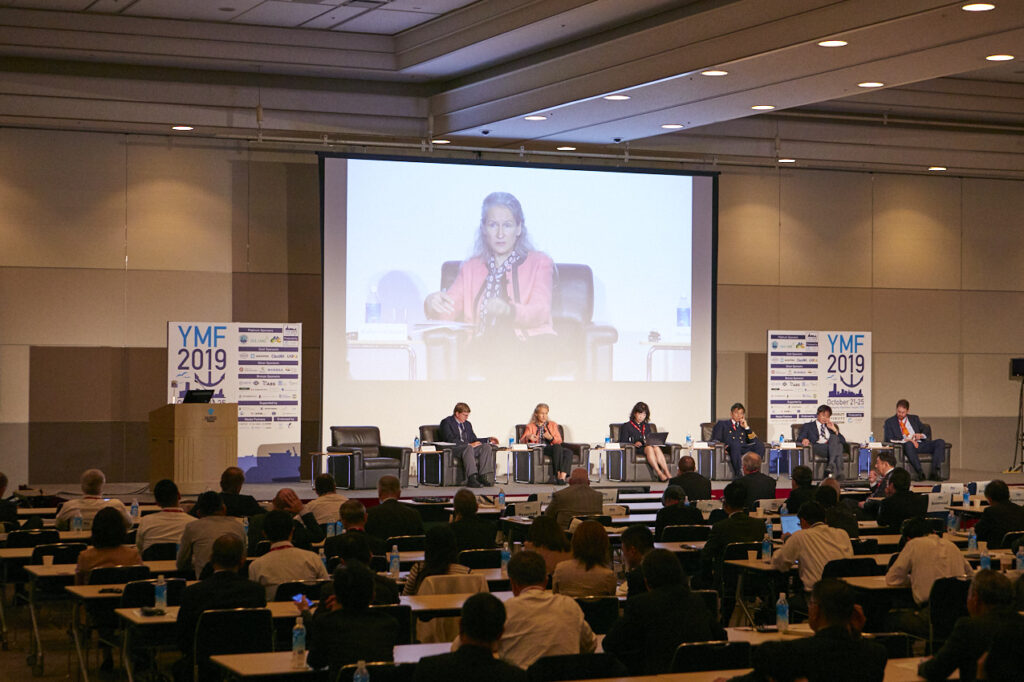 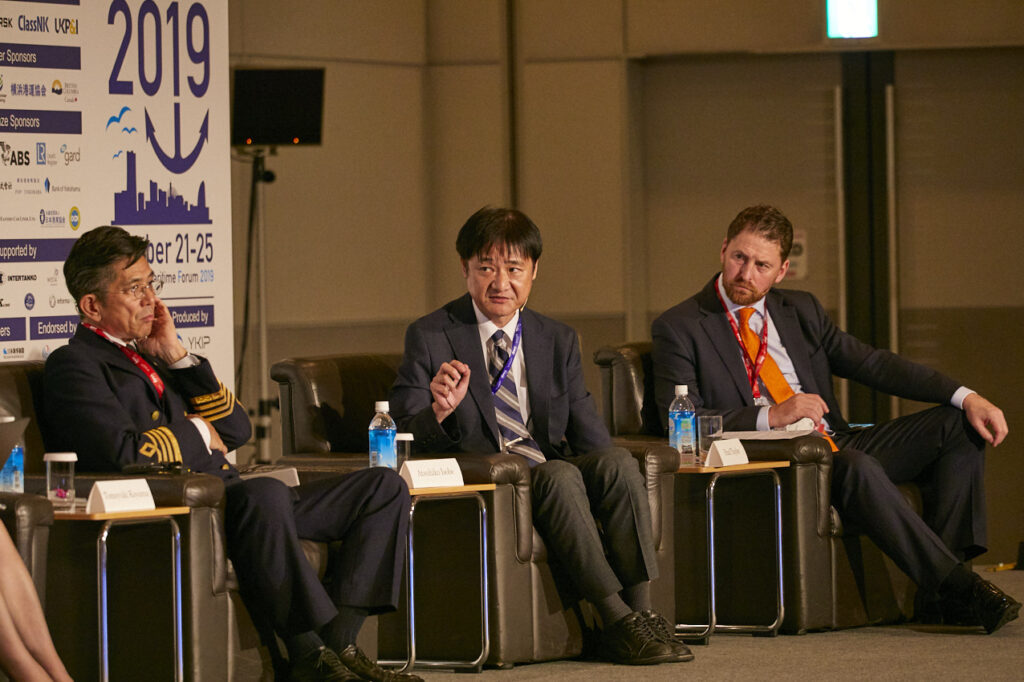 Session 6: LNG as Marine Fuel and its Bunkering
Moderator: Peter Keller, Chairman, SEA∖LNG
Speakers:
Tom Strang, SVP, Carnival Corporation & PLC
Takeshi Hashimoto, Representative Director & Executive Vice President, Mitsui O.S.K. Lines, Ltd.
Capt. M. Segar, Assistance Chief Executive, Maritime and Port Authority of Singapore (MPA)
Takayuki Sasaki, Director, Senior Managing Officer of Offshore & Engineering Division, Japan Marine United Corporation
Svein Steimier, President and CEO, NYK Group Europe
John F. Hatley PE, Americas VP, Wartisila
Session 6 focused on the petential of LNG as a marine fuel and the provision of an LNG bunkering system. Peter Keller stated, “a bridge connecting past fossil fuels to zero carbon state is needed,” and emphasized, “LNG fuel is a promising way to reduce atmospheric pollution.” John Hatley also stated “The use of LNG fuel should begin right away both to earn profits from investment and to impact the environment.”, based on a well-developed SEA\LNG research
Svein Steimier introduced the world’s first LNG fuel automobile transport vessel and the next-generation battery-equipped LNG fuel automobile transport vessel introduced by United European Car Carriers (UECC) which is a joint company formed by Nippon Yusen and Wallenius Wilhelmsen Lines. He expressed his expectation that, “The competitiveness of LNG as marine fuel has already been proven. In the future, more and more ships will be powered by LNG fuel.”
Captain Segar explained, “the Port of Singapore is one of the world’s leading bunkering hubs” and added, “When environmental standards become stricter, it will be necessary to search for clean replacement fuels, but among these, LNG is the most mature and most practical fuel. So, a system permitting the safe and efficient bunkering of LNG must be established.” He also mentioned the ship-to-ship LNG bunkering operation which started this year. In order to achieve the goal of a 50% reduction by 2050 of greenhouse gas (GHG) emissions from their 2008 level, Takayuki Sasaki said, “It is a goal that includes existing vessels, so new vessels must provide even greater emission reduction effects.” He added, “The role of a shipbuilder is to build vessels which are able to perform as demanded (by ship owners/operators), we think LNG fuel is the most effective solution for now.”
Takeshi Hashimoto introduced MOL invested LNG bunkering vessels which will be allocated to Singapore and Rotterdam, and pointed, “LNG fuel will not only reduce emissions of GHG, but also provide superior economic competitiveness, I think.” on the other hand, as challenges, he mentioned the huge financial impact involving the initial investment on infrastructure and equipment such as LNG fueled ship building and the contraction of bunkering systems. He stated, “the initial cost must be reduced in promoting LNG as mainstream of marine fuel, and we must focus on how to overcome this challenge.” Tom Strang stated, “I think that LNG will become the mainstream marine fuel for the next-generation.” and introduced the progress on LNG fueled cruise ship building in Carnival.
A voice from the audience raised, “Why we don’t see LNG fueled vessels in new-built as many as it could be?” Captain Segar and Takayuki Sasaki then responded by mentioning the comparably high initial costs and the un-readiness of bunkering system. Takeshi Hashimoto and Tom Strang explained, “the bunkering availability is increasing maybe slowly but surely, and we have no worries on the LNG supply.”
“we need to persuade shipowners more effectively.”, added by Tom Strang, and “in order to offset the initial cost, subsidies and tax breaks shall be effective at least at the initial stage.”, added by Takeshi Hashimoto. 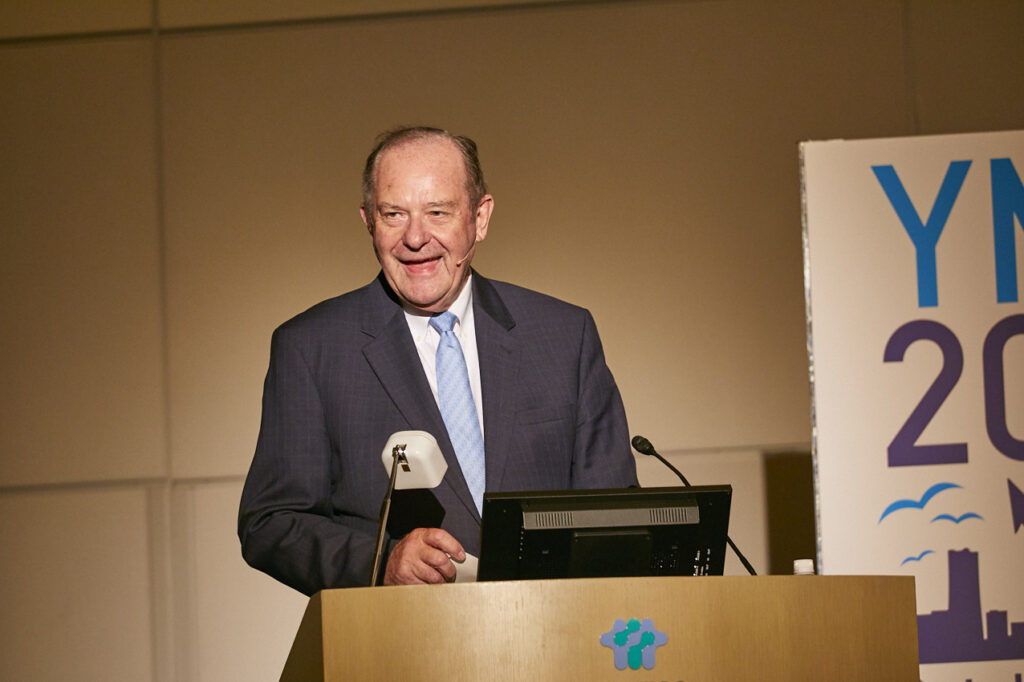 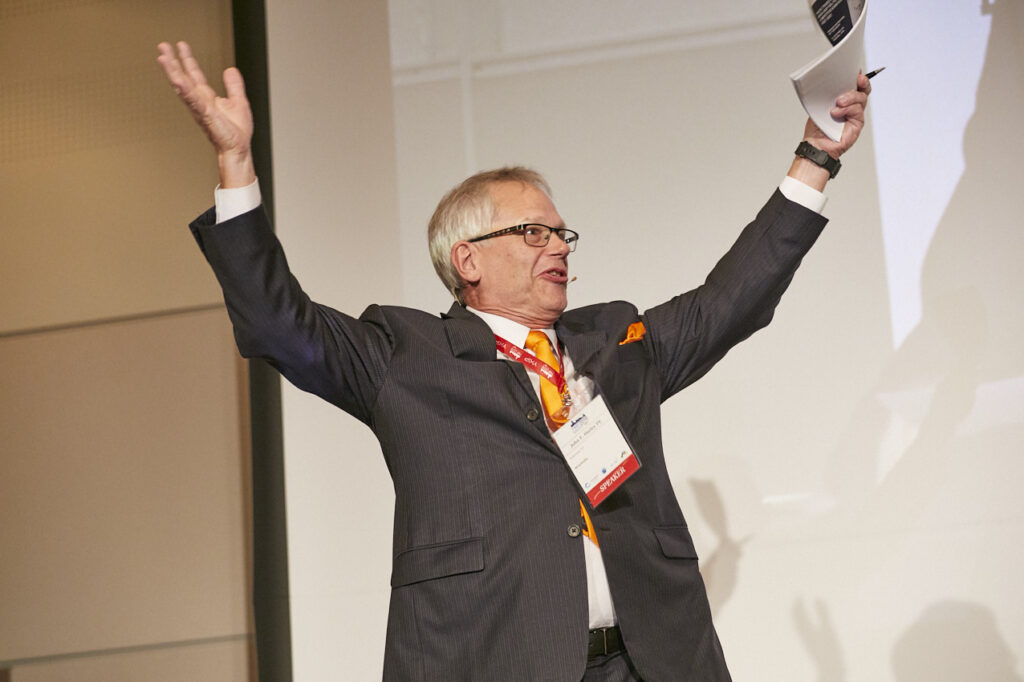 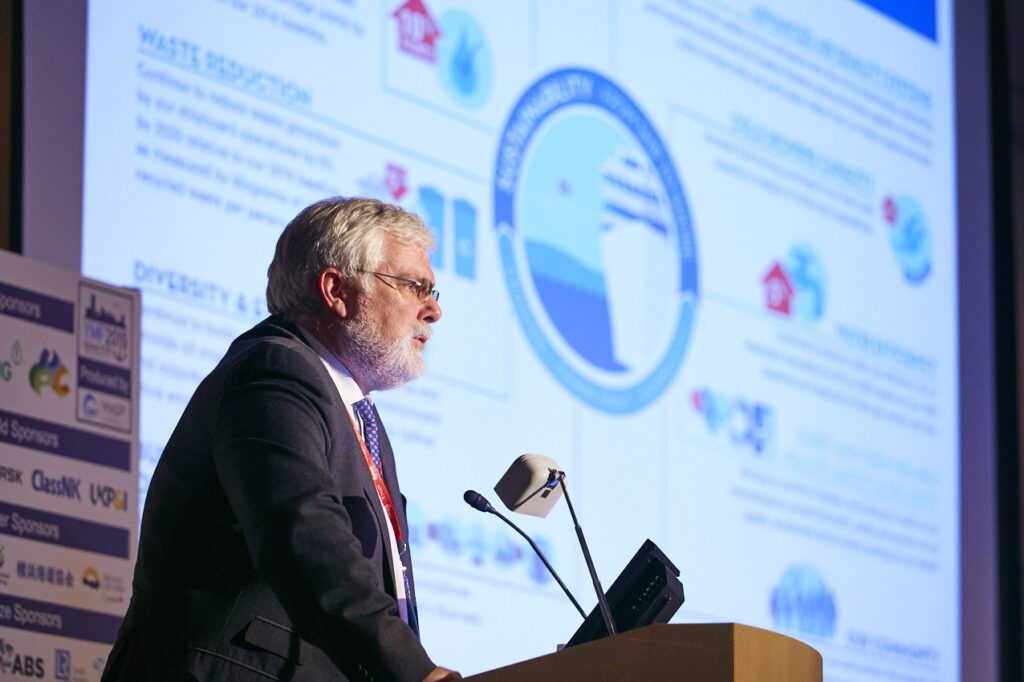 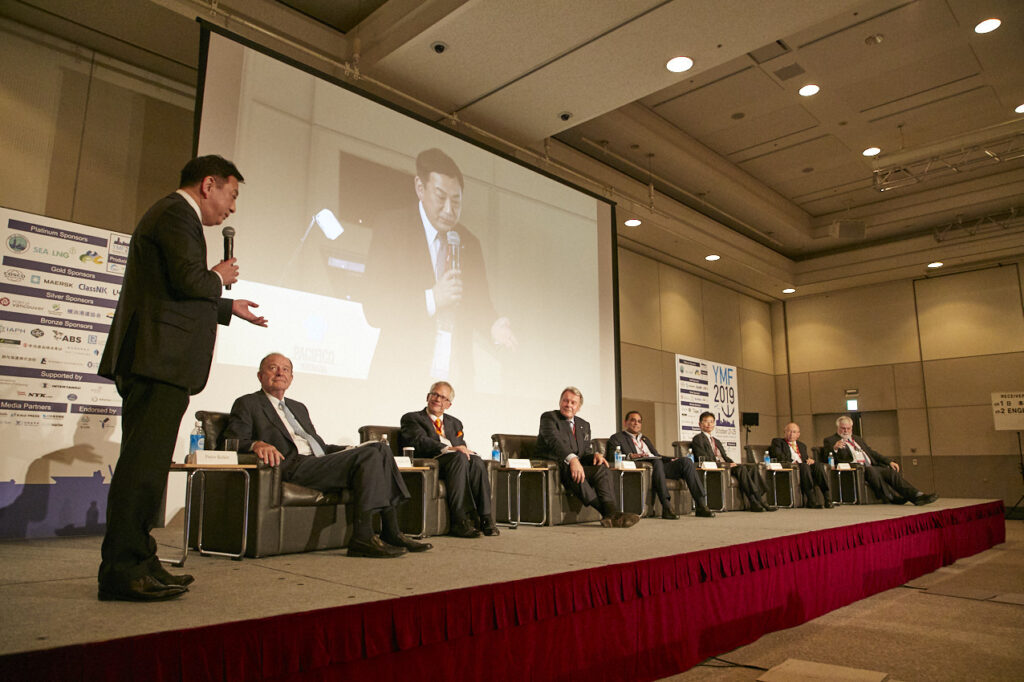